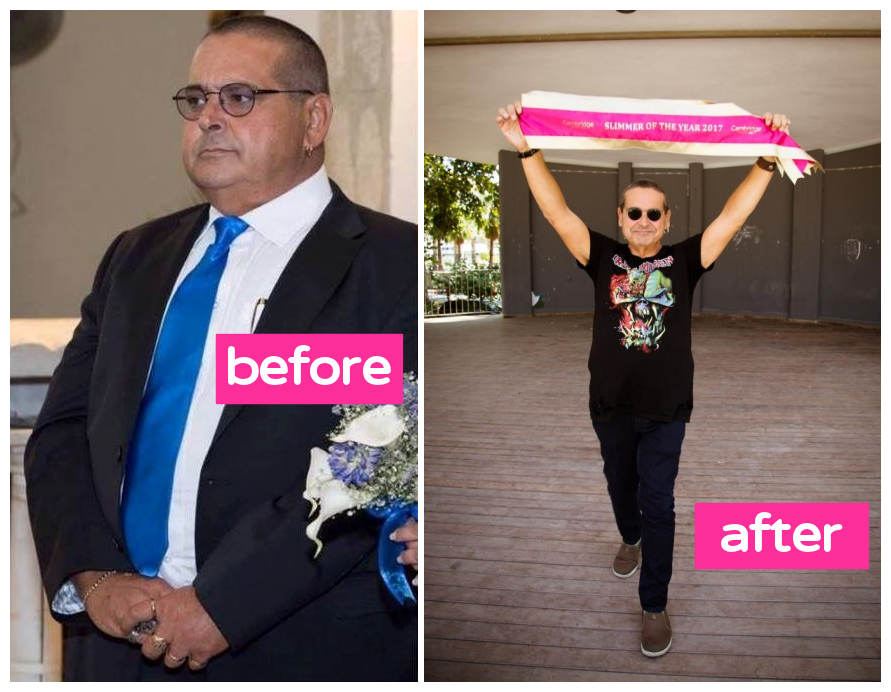 My name is Alfred, I am from Gibraltar and I have lost 31kg on the CWP diet!

I have always had a problem with weight, being big but I think that my real problem with my weight started when I was involved in a serious motorcycle accident in 1991. I broke my left knee and hip and the result of this was that I was in constant pain, I couldn’t walk very well and this was very depressing for me so I turned to comfort eating. I also found out that I needed a hip replacement, which out me further into a dark place in my life. It was a vicious circle.

During this time, my weight ballooned, I ended up at 156kg. I also required a machine to help me sleep at night as I was suffering with sleep apnoea.

In the end, my doctors recommended for me, a gastric by-pass operation which I thought would be the end of my problems and the start of a new life with no weight issues. This operation was done in 2010, but my hopes were all dashed when there were some problems during the surgery and I ended up in intensive care for 3 days following this.

But once I was released from hospital, the weight started to drop off me, I thought for a brief moment that this was finally it, I could live a good life. I lost nearly 60kg in that year following the surgery.

Unfortunately though, complacency started to kick in and without real direction and motivation, my bad eating habits started to take over again and bit by bit the weight started to pile on again. I tried and failed with other diets, and all of this failure made me really sceptical about the success of any diet at all.

In 2016, I was back up to 113kg and well on my way back to my pre-surgery weight and I saw a photograph of myself at my daughter’s wedding. I thought this has to stop but how?

I met a wonderful person, Krisanne, who told me about the diet and I was so sceptical but she convinced me that I should at least come and try. So I did in a resigned way that this would be another diet which would not really work for me. I thought I would try it for a week and what spurred me on to go back the second week, was curiosity to see if it worked. I lost 3kgs in the first week and the motivation from my consultant Krisanne on that day, made me come back the third week and then lo and behold, there we were 9 months later and I had lost 31.8kgs.

Cambridge has changed my life, I don’t run out of breath as I did before I started the diet, I find I can walk a lot more, I don’t get tired as easily. And now I can actually wear what I want, not what is available.

I feel great, I feel fitter and healthier than I have since before my accident, but I am totally convinced that the reason that this has worked so well is the constant support from my wonderful consultant Krisanne. I look forward to going to see her, to be weighed and her support has meant so much to me. Thank you!